The Wikimedia Foundation is the powerhouse nonprofit that operates Wikipedia. They’re deeply committed to converting volunteer efforts and donations into a future where everyone in the world can freely access reliable, neutral information. Wikipedia is one of the top 10 most-visited websites on the internet—and the only one on the list run by a nonprofit.

Donations from Wikipedia’s six-million-strong giving community keep the Foundation’s operations and free knowledge websites including Wikipedia and Wikimedia Commons running. Thea Skaff is the Senior Manager of Global Fundraising Campaigns and she manages the logistics and timing of international online giving campaigns for an entirely remote team. Their website banner and email campaigns prompt Wikipedia users to donate a few dollars at a time on a massive scale.

With campaigns running in as many as 30 countries and 20 languages, there’s plenty of overlap and a lot of balls to keep in the air at once. Pulling it off requires complex project management across multiple time zones. The Online Fundraising team initially managed this mammoth undertaking using only spreadsheets, but there were snags in the system:

These difficulties had a ripple effect, compromising efficiency. When Thea discovered that the Foundation’s Communications team had started using Asana through the Asana for Nonprofit program, she began to consider it for her own team.

“Because the Online Fundraising team has such a high volume of campaigns, we're churning out work all the time. It was a high priority for us to get something in play quickly.”—Thea Skaff, Senior Manager, Global Fundraising Campaigns

The team needed a tool with depth of functionality to support a calendar with many campaigns. But it also had to play nice with their other tools and fit easily into their workflow. Getting people to adopt the platform was key—it wouldn’t matter how great it was if no one used it.

Thea and her colleague Moska Shaver, Email Campaign Specialist on the Online Fundraising team, chose Asana for a pilot program largely because of its intuitive interface and flexibility. They liked the ability to flip through project views such as Calendar, Lists, and Boards because different teams required different levels of information. Asana’s color-coding functionality has become a team favorite, because it gives them the ability to understand complex projects at a glance. With Asana’s custom fields, they can add—and filter—mission-critical tasks, and set up their work in a way that makes sense for the project at hand. 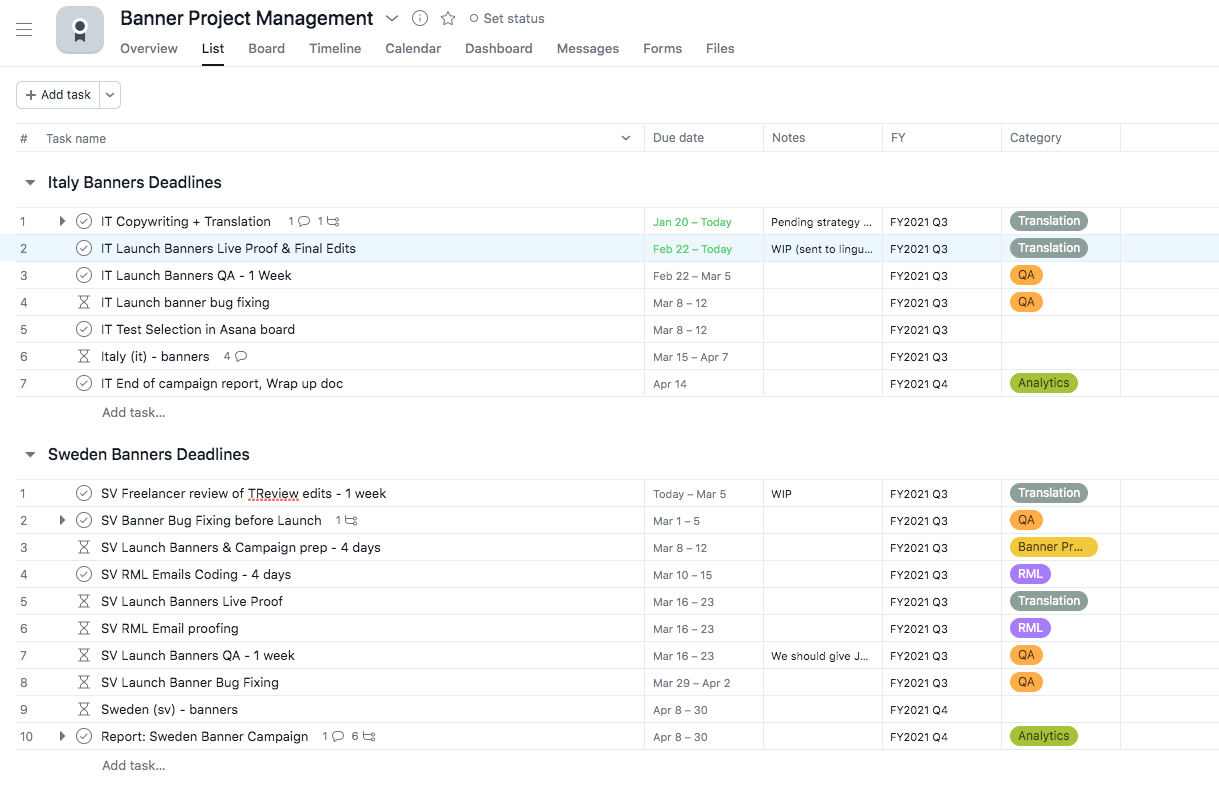 For a smooth transition, they first mapped the team’s current spreadsheet process to projects in Asana. Then, Thea reached out to team leaders for their workflow wish-lists and general ideas on project management before baking their insights into the Asana workflow.

The 6-month pilot familiarized the team with the platform. Their “a-ha” moment happened when they realized Asana wasn’t just a place to track everything, but also a place to clearly see the relationships between all projects. When they color-coded countries and languages, they could quickly see how campaigns overlapped, and get a high-level view instantly. Asana’s striking design, with visual cues to deepen the understanding of a project’s scope and status, became a catalyst for adoption.

“People quickly saw that this was what we needed. We ended the pilot faster than we thought we would. The team agreed, ‘We cannot do the spreadsheet anymore,’ and that was that.”

Collaborators see exactly what they need to know

The Online Fundraising team now manages all global online fundraising campaign work in Asana. Each campaign, usually banners or emails, are represented as an Asana task. These tasks live inside Asana projects and multiple campaigns are grouped together for a holistic view.

Clicking into a task—such as a banner campaign in France—brings up detailed information like payment processing, timing, and language. For leadership and cross-functional teammates, the high-level task view might be sufficient, but the detailed information is essential for the Production, Tech, and Donor Relations teams who rely on this critical information to perform their own roles. And tasks can live in more than one project, which helps cross-functional teams avoid duplicating work.

For email campaigns, Timeline View displays the month and country for the deployment, color-coded according to geography. It’s easy to see, for example, when France’s campaign might overlap with Japan’s. Clicking into the details brings up precise launch timing and segment size, so Donor Relations can sync the task to their Google Calendar and know immediately when 20,000 emails went out—the system equips them to answer any donor questions that might come through. The Production team, which creates and translates these emails, also benefits from that extra level of detail. 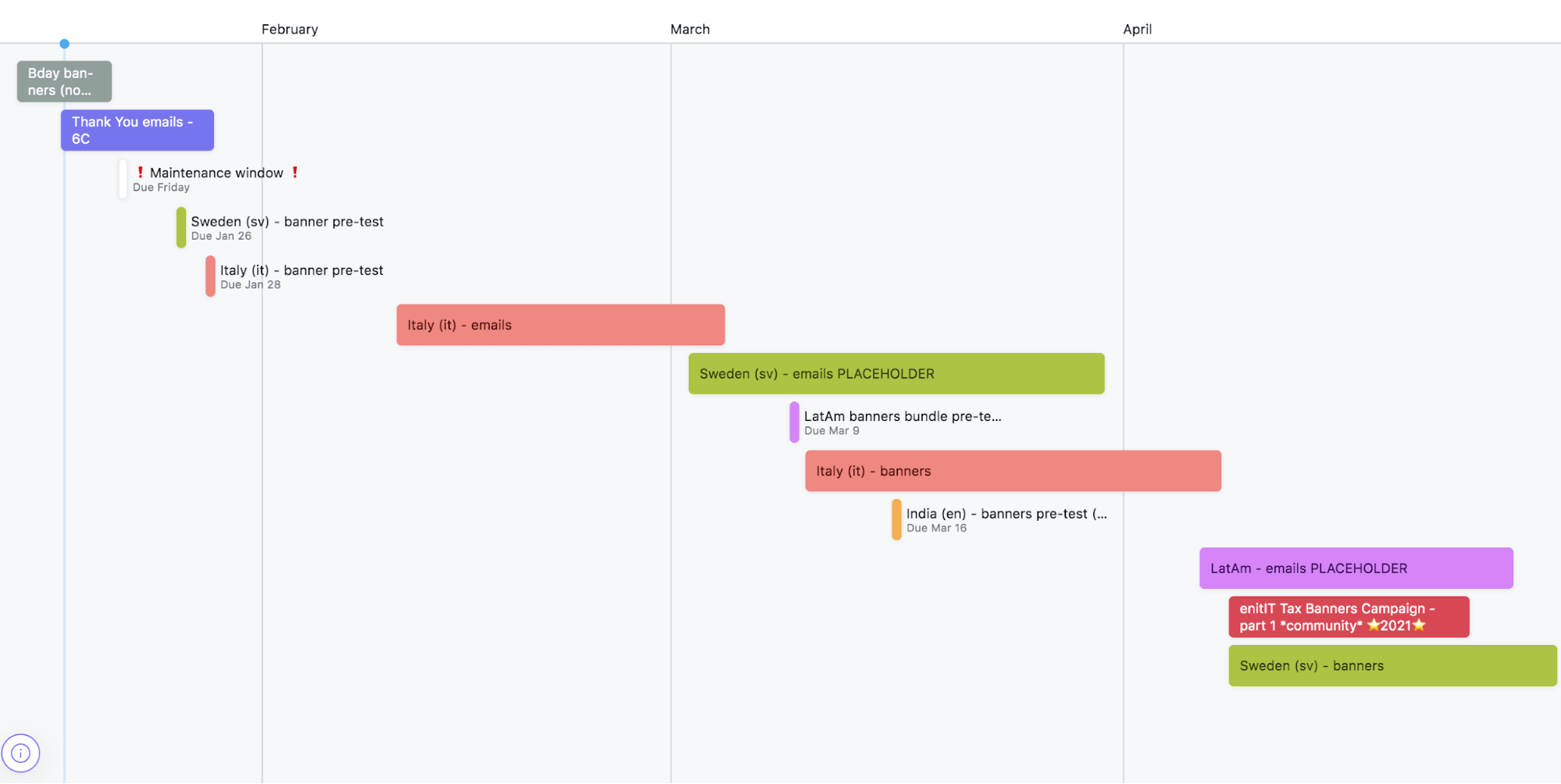 Clearing out calendars and clearing up launch schedules

Now that the team uses Asana, creating timelines for campaigns is a cinch. They now have an optimized sense of the lead time for each type of campaign, and a far better visual display of the dozens of details that inform important planning decisions. The improved visibility across tasks, ownership, and deadlines has reduced stress, mitigated risk, improved communication, and increased capacity across the team.

When the COVID-19 pandemic hit, the Foundation had to rethink their entire fundraising approach and carefully consider what was appropriate. They had to rewrite appeal copy and change the timelines for all campaigns, essentially rebuilding their production calendar. Doing this in spreadsheets would have been rough, but Asana supported them through it.

Thanks to Asana, the team has been able to clear status meetings from the calendar, free up time for project work, and reduce the number of early mornings and late nights for global stakeholders—a big win for employee energy and morale.

“With Asana, people aren't as lost anymore. They don’t need to ask, ‘Is this happening on Tuesday?’ If plans change quickly, the team is aware and it’s clearly documented. You don't have to wait until a meeting, a chat. You see everything in one place.”

Other Wikimedia fundraising teams are following in the Online Fundraising team’s footsteps and adopting Asana. The team hopes to expand their use of the platform for an even more holistic view across the entire Fundraising department.

“What I hope will happen in the next year is that everything will get pulled into a single calendar so we can say, ‘This is every single fundraising activity we have, in one place.’”

This year, Wikipedia dons its party hat for the site’s 20th birthday. The Wikimedia Foundation and Wikipedia enthusiasts worldwide have been taking the opportunity to celebrate the humans that make the project possible. With Asana underpinning a steady stream of support, the Wikimedia Foundation is moving even faster toward a brighter, more informative future for all.