Can you identify exactly who’s doing what by when for each task, milestone, and deliverable in your project? If not, you might need a RACI chart.

RACI is an acronym to help teams clarify project roles and figure out who the responsible party is for any given task. Whether you've never heard of RACI before or you’re considering creating a RACI chart for your next project, here’s everything you need to know about how to create and use these charts.

What is a RACI chart?

A RACI chart (sometimes called a Responsibility Assignment Matrix) is a way to identify your project teams’ roles and responsibilities for any task, milestone, or project deliverable. By following the RACI acronym, you can clarify responsibility and reduce confusion. RACI stands for:

[Read: What is a deliverable in project management?]

When should I create a RACI chart?

RACI charts are a helpful way to track each stakeholder’s role for a task, milestone, or deliverable—especially if you’re managing a complex project with many decision makers and subject matter experts. With a RACI chart, you can prevent poor decision making and avoid roadblocks in the approvals process that could impact overall project success.

These charts are especially useful if your stakeholders may be taking on different roles throughout the project. For example, there could be a stakeholder who is Responsible on one deliverable but Informed on another. With a RACI chart, you can clearly outline these details and make sure everyone knows who’s responsible for what.

To build a RACI chart, list every task, milestone, or deliverable for your project. Then, identify who the Responsible, Accountable, Consulted, and Informed team members are for each one.

Let’s say you’re updating the homepage on your website. Project stakeholders include:

You want to create a RACI chart for five tasks and deliverables:

The pros and cons of RACI charts

Ultimately, the question is: should you create a RACI chart? While RACI charts are a useful tool to identify project responsibilities, they can get a little cumbersome over the lifecycle of a project. Here are the pros and cons of creating a RACI chart for your team’s work:

The benefits of RACI charts

Clear project roles and responsibilities can help your team move fast and reduce confusion about who’s working on what. With a RACI chart, you can ensure you don’t have two team members working on the same thing. As a result, you’ll have an easier time collaborating with your team.

RACI charts are also particularly helpful when the decision-making process is split between tasks. There might be scenarios where the Informed on one task or milestone is the Responsible or Consulted on another—in order to have that clearly defined, it’s helpful to track this work in a RACI chart.

RACI chart pitfalls (and how to avoid them)

RACI models focus on the granular, instead of capturing work at the project level. You might know who the Consulted is on a particular task—which is helpful—but knowing that doesn’t help you understand how various stakeholders interact with the broader project work.

RACI charts are limited because they aren’t able to adapt to your project needs in real time. In order to establish clear expectations and eliminate confusion on the project level, you need a project management tool.

Take your RACI chart to the next level with project management

With project management software, every task has an assignee—that’s the Responsible. You can see work on the project level, so the Accountable and Informed don’t have to check in via email or status meetings. And, for any approvals you need from your Consulted, you can track reviews and approvals in one place. That way, your entire RACI team has a central source of truth for all of the work being done. 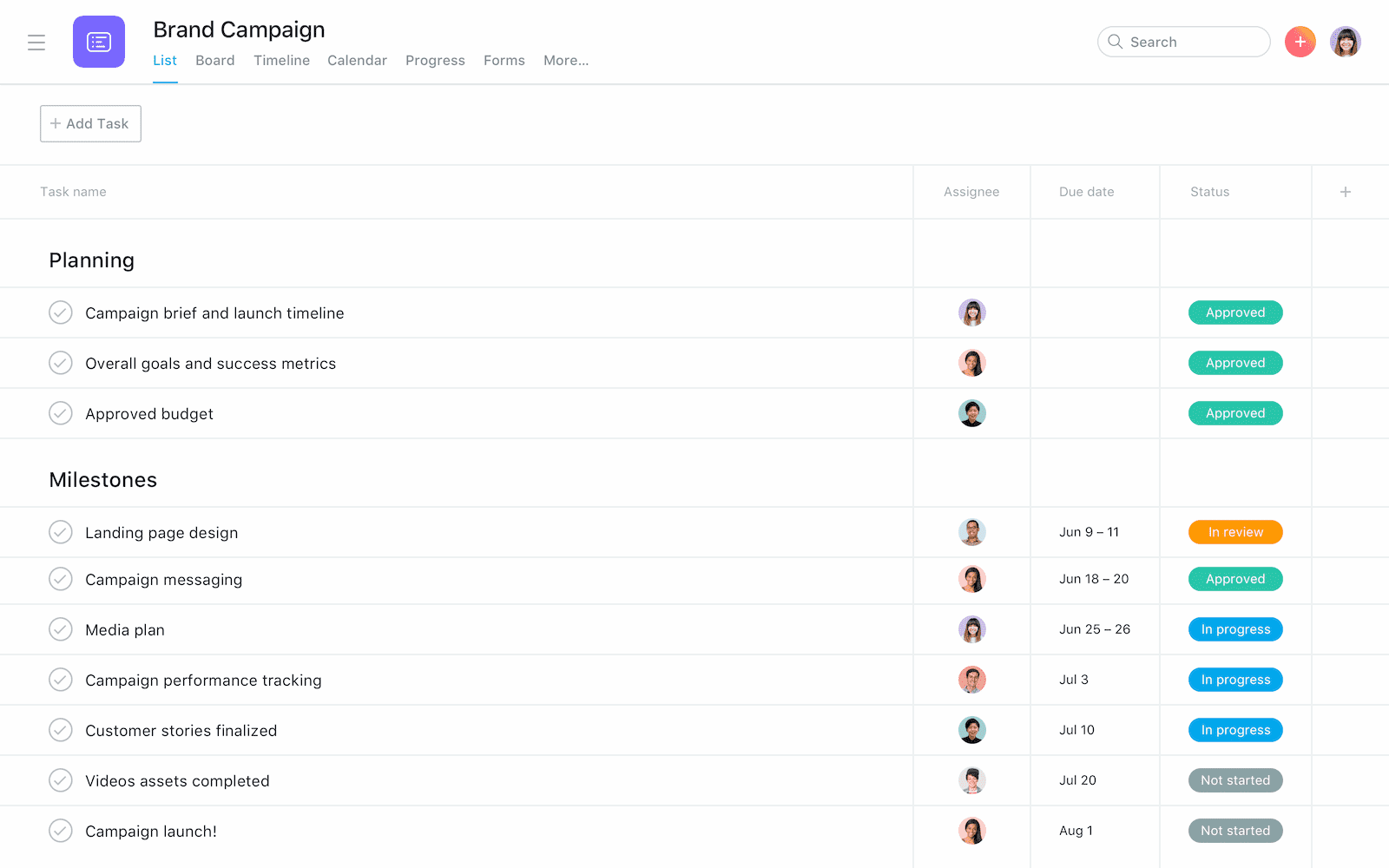 Instead of having your RACI chart separate from where the work is happening, project management tools capture the topic, assignee, and other important information like the task due date or relative importance. That way, your entire project team has visibility into who’s doing what by when—and you’re not relying on a single person to manage and update your RACI chart. Project management tools update in real time, so you can see exactly where you are in the approval process.

Track who’s doing what by when

Clear team roles and responsibilities help you hit your deliverables on time. Tracking different and complex stakeholder responsibilities in a RACI chart can help you do that—but RACI charts are just the beginning. Learn more about work management, and how your team can benefit.

Create your next project plan with Asana.

An introduction to work management

See how a work management tool helps teams easily connect and collaborate, enabling everyone to achieve more, together—even in an increasingly distributed world.

What is a stakeholder in project management?

Knowing how to identify and manage project stakeholders can help you increase your project’s impact. Learn how to improve stakeholder relationships and gain buy-in from the people who matter most.