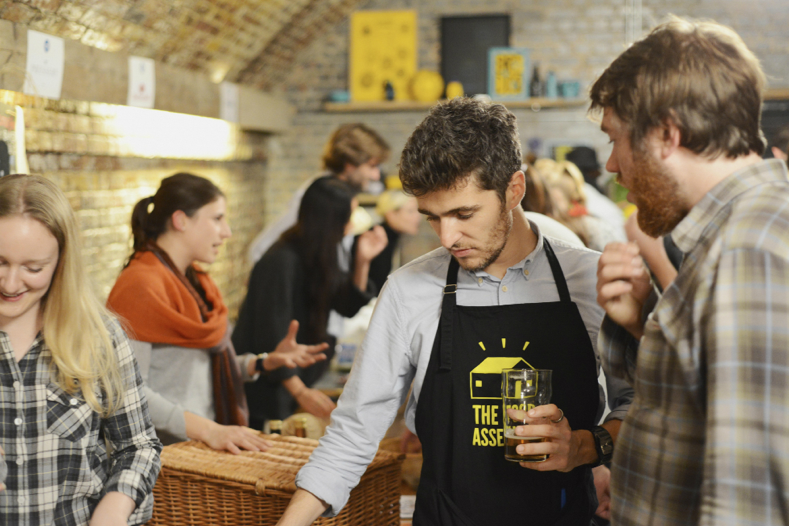 Can changing the way you buy bread change the food system? The Food Assembly thinks so.

The Food Assembly launched in 2011 with a bold mission: to empower people to produce and access local, farm-fresh food in a more sustainable way. The French company does this by facilitating marketplaces called “assemblies” that connect food producers with consumers. Here’s how it works: Local hosts organize the assemblies, selecting farmers and producers. Food Assembly members then shop online and pick up their vegetables, meats, cheeses, and more at weekly meet-up spots, like cafés or schools. It’s like shopping a well-curated market, but more direct and personal.

“When you buy through The Food Assembly, your money goes directly from you to the producers,” says Clément Chapalain, product manager at The Food Assembly. “With traditional grocery models, intermediaries buy food wholesale. Those intermediaries have all the power and leverage to reduce their costs, so usually farmers don’t get paid as much as they should.”

In The Food Assembly model, farmers set their own prices and can more accurately forecast their sales. Members get fresh goods they may not find otherwise directly. “By encouraging direct selling and with Hosts selecting only the best producers, we have a quality and a diversity of food which you won’t find in groceries and supermarkets,” Clément says.

A platform that keeps evolving

Today, The Food Assembly operates over 1,200 assemblies in Europe with more than 6,000 active producers and 190,000 active members. Around 65% of the assemblies are in France. The rest are located throughout Europe, including the UK, Germany, Belgium, Switzerland, Italy, Spain, Denmark, and the Netherlands. While there may be similar initiatives, few are large enough to operate in multiple countries like The Food Assembly.

“If you look at supermarkets and the traditional food system as our competitors, then we are really, really small,” says Clément. “So one of our challenges is: how can we scale from being a big player in the short food supply system to being a player in the food system in general?”

It’s a huge ambition for a company of just 110 people.

At the core of The Food Assembly is a platform with multiple interfaces. There’s one interface for food producers to create their catalogues, connect with assemblies, and manage their sales. There’s another for the hosts who manage the assemblies. And there’s one for members to shop.

Each audience has different needs. For example, hosts are entrepreneurial people who want many features on the platform, Clément says. But food producers, on a whole, are not as tech-savvy and would rather spend their time making their products than using the computer. “Sometimes The Food Assembly is the only internet platform that they use.”

Maintaining the existing platform and its features for users in nine countries while building new ones is a big challenge. “We have to be able to keep innovating in order to keep growing and scaling our impact. But we also have to maintain the existing platform which packs a lot of specific features.”

To keep up with the pace, The Food Assembly product teams need to be organized and clear on their priorities. There are 35 people who work across four distinct product teams. The teams include designers, developers, product managers, data scientists, engineers, support agents, and UX researchers.

When Clément arrived at The Food Assembly, he found colleagues using GitHub to manage projects because that’s what the developers used to maintain their code base. But it’s not designed for cross-functional project management, and as the company grew, employees realized they needed another tool.

The company tried several tools, doing pilot tests with a few people at a time. It piloted Asana with just five people, but soon 20 people were using it. “It grew very organically compared to other tests that we did,” recalls Clément. “We thought of Asana like a collaborative to-do list.”

They ultimately chose Asana for use across the company because the onboarding process was the easiest. “It crosses one of the main boxes that we wanted to tick, which is that it’s easy for people to understand and to onboard. So now everybody uses it.”

A clear plan that everyone can see

Each of the four product teams uses Asana to track ongoing initiatives, but the product team as a whole also keeps an overarching roadmap in Asana called “Product Roadmap Dashboard,” which aggregates the high-level plans of each product team. This not only helps the product team stay organized, but gives the rest of the company insight into the product team’s work.

“I think that the most important thing—the thing that we were missing before Asana—is clarity. Before, everybody would ask, ‘What is the product team working on?’ With Asana, we’re able to say, ‘We have this project, this project, this project. And here is where we summarize everything.’ We also send regular updates on the different projects via the project status update feature. It helps us better communicate to the rest of the company what we are and are not building.”

Clément finds Asana especially helpful in explaining the complexity of his team’s work. “There is no small feature. There is no small bug. Everything can be quite complicated. Having everything in Asana helps us demonstrate that complexity so that everybody understands what our priorities are and how our work aligns with the global strategy of the company.”

Everything is organized in Asana

According to Clément, better clarity is one of the biggest impacts Asana has had on the work environment. “Asana gives us clarity around who’s on the different teams, the scope of those teams, what they’re working on, and who you should get in touch with if you want to discuss a specific subject.” But Asana helps in other ways, as well. The Food Assembly uses Asana to:

“The real challenge with introducing any tool is getting the rest of the team to use it. Asana was frictionless—it was easy for everyone to quickly understand it and get on board.”

Using Asana wall-to-wall has been crucial in helping Hack Reactor scale. As Hack Reactor CEO Tony Phillips puts it, “We’ve cut our operations costs in half because we’re able to execute more efficiently with the processes we’ve set up in Asana.” And as costs go down, the quality class experience—and the post graduation experience— goes up. Graduates from Hack Reactor are hired at a 98% rate.